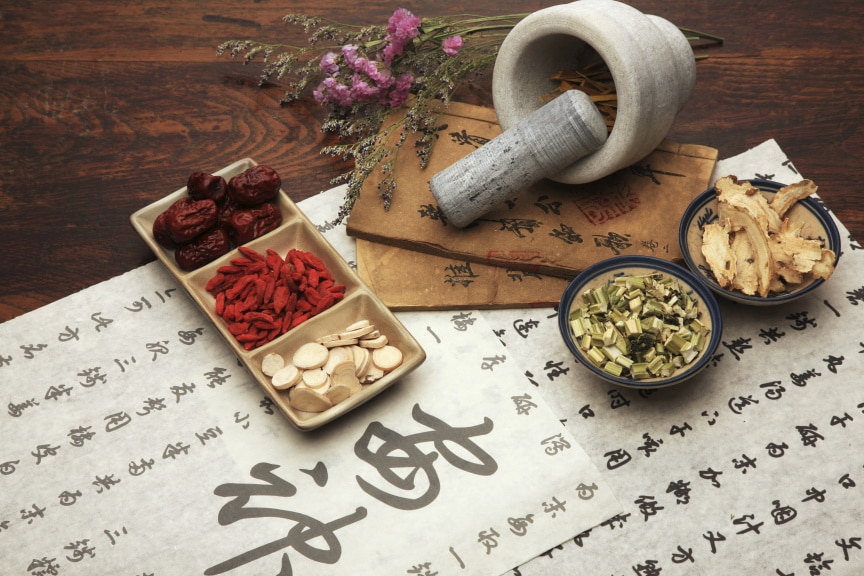 Traditional Chinese Medicine (TCM) views people as worlds in miniature, so it seeks to improve our capacity to balance and replenish our own capabilities. TCM minimizes the erosion of our soil by enriching it, makes the most of the flow of nutrients by increasing circulation, and helps avert blocks that obstruct the movement of bodily fluids and energies. Therefore, TCM anticipates problems by upholding our interior landscape.

Contrast that worldview with that of contemporary medicine, which looks for “busted” parts to replace. Typically, modern conventional medicine intervenes only after a crisis arises, whereas TCM aims to correct depletion and stagnation at earlier stages, avoiding greater problems later on.

While Chinese medicine excels at enhancing recuperative power, immunity, and the capacity for pleasure, work, and creativity, it can remedy ailments as well.

According to Chinese cosmology, the whole of creation is born from the marriage of two opposite principles, Yin and Yang. Earth and Heaven, winter and summer, night and day, cold and hot, wet and dry, inner and outer, body and mind are reflections of this pairing of opposites. Creating and maintaining a harmony between these opposites means health, good weather, and good fortune, while disharmony brings disease, disaster, and bad luck. The entire aim of TCM is to restore harmony, in the world and in the body.

TCM is based upon a universal notion, expressed in nature in bi-polar terms Yin and Yang. Energies that characterize the complementary yet opposing materialization of all phenomena, yin and yang are the most basic divisions of energy in the universe. That which is above corresponds to a below; heat is complimented by cold, night is pursued by day. In all of manifest creation, qi is divided and apparent in duality.

We might think of this as two basic forces operating in nature. One force is an outward, expansive, linear, positive force that changes things. The other is an inward, contractive, downward, negative force that is hidden and unmanifest. The outward force is the yang force and is associated with heaven, light, up, daytime, male traits, function and so forth. The inward force is the yin force and is associated with such things as darkness, winter, nighttime, female traits and structure. All matter and energy in the universe can be represented on the spectrum of yin merging into yang. Health is yin and yang in balance.

Taste is one way of deciding which herbs have the needed actions. It represents a sensory method of ascertaining the biochemical action of a given herb or food, in other words, the remedy’s “energy”.

We do not actually have taste buds for pungent. It is called a taste, but is more correctly an irritation of the tissues- a mouth sensation. Spicy taste stimulates, warms and dries dampness. It is used in conditions of excess dampness (mucus) in the lungs, which are associated with the metal element. Spicy taste increases digestion, circulation and secretions.

Salty foods, such as seaweeds, bring out the yang flavor of food and provoke a yang effect in the body. Salty taste retains fluids, moistens tissue and supports the kidneys. It softens masses, such as cysts and benign tumors, and relaxes muscles.

Bitter taste is, all in all, detoxifying and anti-inflammatory. Bitter remedies can be used in small doses before meals as a digestive preparation, stimulating secretion of digestive juices and provoking both appetite and efficient digestion. Bitter taste is cold, so is used to “clear heat”- reduce inflammation, in Western terms.

Sweet taste is nourishing, so is used to tonify. It builds, feeds and harmonizes tissue. The waste byproducts of this building process are acid, though, so we need to be conscious of keeping the body pH balanced when we are in a rebuilding, healing, phase.

Turn up the Heat

An important factor of Chinese energetics is the temperature of the disease. TCM classifies herbal actions based on temperature, and the concept includes influence on metabolic rate and effect on actual body temperature.

A good way to understand the broad concept of temperature is a spectrum from hypometabolic (cold) to hypermetabolic (hot). As the metabolic rate increases, more calories per minute are burned. Temperature and all other biological processes increase. The opposite is true for the cold direction.

Less extreme conditions are classified as warm or cool and most illnesses fall in this range.

TCM always has something to offer for nagging chronic complaints that bother us. Western medicine may heroically rescue us, but Chinese medicine can protect and preserve our health every day. These two great systems offer a great set of complements to each other.