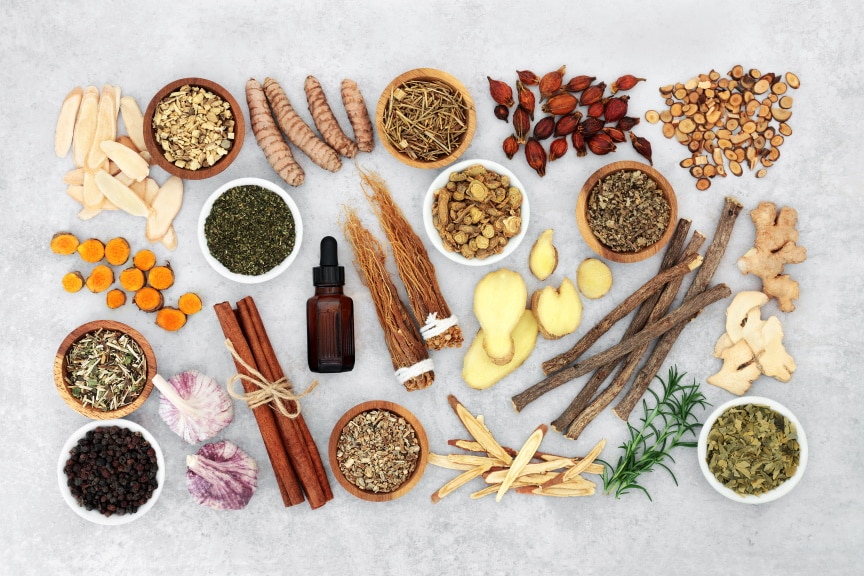 Traditional Chinese Medicine (TCM) makes very little distinction between food and medicine. We put herbs in food for taste, and for medicinal effects. We mix food into herbs to make them palatable. Ultimately, herbs work their way into everyone’s health program.

Herbs are taken for acute illness, to maintain balance and to prevent disease. Their use depends on sharp differential diagnosis procedures. By narrowing down herbal energetics, we can design herb regimes with power, potency and targeted effects.

These herbs are very powerful, so please consult a trained professional before you start using them.

Called the “King of herbs” in Asia, this herb is taken daily by millions of people, and is widely revered as a superior herbal medicine. Ginseng is probably one of the most widely known and used Chinese herbs. Ginseng benefits a plethora of conditions, and, taken daily, maintains a man’s general good health. It is the most important herb for men in TCM.

Asian Panax ginseng is cultivated or harvested in many regions in East Asia, and is often identified by the country of its origin. So ginseng can be Korean, Chinese, or Manchurian, for example.

Due to marketing hyperbole, many other herbs have been nicknamed “ginseng”. Obviously, this serves to confuse us as consumers. On the whole, these are general tonics from their respective cultures. Indian Ginseng, or Ashwaganda (Withania somnifera), is the main tonic herb for men in India. Brazilian Ginseng, or Suma, (Pfaffia paniculata), is an adaptogen from South America.

Ginseng increases physical working capacity in humans in many ways. Ginseng is an adaptogen, which means it helps the body adapt to stress. Ginseng may help you feel more energized by stimulating the central nervous system, increasing metabolic function and increasing physical and mental efficiency.

This superb tonic herb is the most popular Chinese herb, and may be the most extensively used herb in the world. It’s called the “Queen of herbs” in China.

Around half a billion women in China alone, as well as millions in other Asian countries, especially Japan, take dong quai daily to strengthen their reproductive organs, regulate the menstrual cycle, and as an all-around health builder. The Chinese name means “Return to proper order”.

In English, there are many different spellings of the name. You will see Dang Gui, Tang Kwei, etc.

Dong quai is sweet and pungent and is mildly warming, with specific strengthening benefits for the heart and liver- a blood tonic and blood mover. Therapeutically, its main function is to build and regulate the blood throughout the body, but especially in the pelvic area, making it particularly valuable in increasing circulation to the female organs. It is used in anemia and has high iron content, in addition to high levels of vitamin B12, a blood building nutrient.

The Chinese name for this herb is wu-wei-tze, or “five flavor berry”, indicating that the fruit contains all five flavors of Chinese herbal pharmacy. The skin and the pulp of the fruit are sweet and sour, the kernels are pungent and bitter and the whole berry has a salty taste.

Herbs with this taste profile are rare, and this detail predicts schisandra’s use in a wide variety of conditions. Schisandra is mainly sour, though, and most definitely astringent.

This berry is essentially a general tonic, used to “prolong the years of life without aging,” – a sort of “poor man’s ginseng”. Traditionally, hunters and athletes have used schisandra with the conviction that it will increase endurance and fight fatigue under physical stress, and it is used as a male sexual tonic.

This Chinese native continues to be widely grown. Once it has been boiled in a special black bean liquid, it is considered a superior medicine. Sometimes this herb is incorrectly known as “fo-ti” in America.

Ho shou wu is a major tonic. The action is long-term and very food-like. It lowers cholesterol, strengthens the heart, regulates and supports urinary function and reduces smooth muscle spasm. It treats low stamina and constipation.

The Chinese common name comes from the name of a famous herbalist (Mr. Ho) whose infertility was reputedly cured by the herb. In addition, his long life was credited to the tonic properties of this herb.

It’s not often that a powerful energy and immune herb tastes like delicious soup, but this favorite Chinese winter tonic is one that does.

Astragalus root (Huang Qi) is renowned as an immune system enhancer. Also a building tonic, this herb is used as sort of a “junior ginseng.”

Used as a qi tonic and to assist healing from chronic illness, astragalus boosts energy, increases stress adaptation, is particularly antiviral and amplifies the efficiency of just about every type of immune function.

Isatidis root (Ban Lan Gen) is considered to be synergistic with astragalus, and the two are commonly used in combination. Where astragalus is warming, isatidis is a cooling herb, so it is used to reduce fever. Isatidis is a broad spectrum antimicrobial, with activity against many types of virus and bacteria, and, according to TCM, strengthens the lungs.

A study showed that components from isatidis are immunostimulating in animal tissues. In another study a Danish group looked at isatidis for lung infection caused by Pseudomonas aeruginosa, in rats. Compared to the control group, the herb was able to reduce the incidence of lung abscess and to decrease the severity of the macroscopic pathology in lungs. In the great majority of the rats, the herbs reduced the inflammatory response in the lungs.

This article is part of a series on Chinese Medicine. Read Part 1 here. And here to read Part 2.