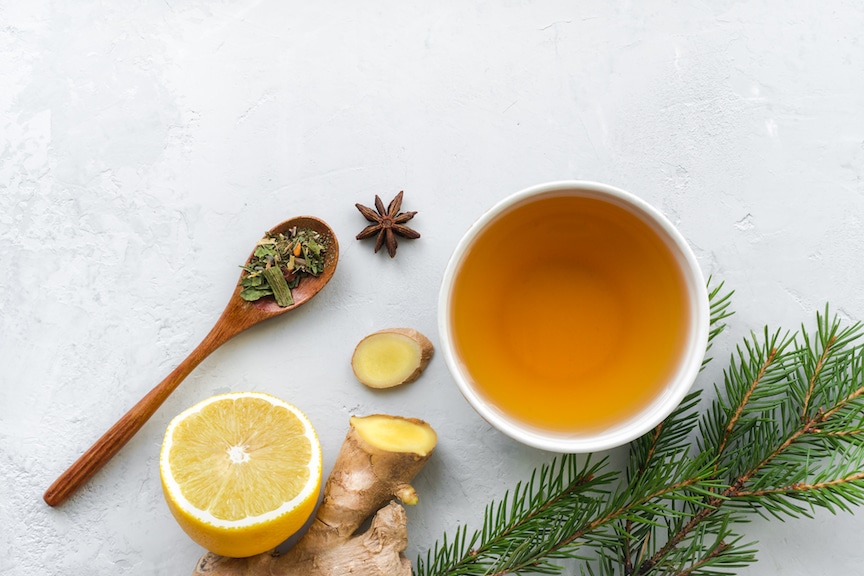 In winter, the thermometer plummets. We get deep into the hibernation cycle, we feel sluggish and we may accumulate excess mucus which causes a variety of diseases. It’s a time to warm up and dry out–especially our respiratory tracts. We need to maintain and build our strength to ward off the cold.

During the winter, avoid getting exhausted. To maintain your good health eat a nutritive diet that will build good healthy tissues. Stabilize your daily routine and food habits with consistency and regularity in your schedule. Promote a calming atmosphere that nurtures your spirit. Lastly, take steps to prevent constipation.

In some areas winter is dry. In a dry and cold climate people are more prone to nervous system diseases. For this type of environment, warm yourself, moisten, and avoid the wind and cold.

Avoid high fat food, as people tend to put on weight during the winter. If winter is dry where you live, add sweet, filling foods, including figs, carrots, tomatoes, dates and warm milk products, and add a little light oil, such as ghee or sesame oil to keep the tissues moist.

Concentrate on foods with pungent taste, like ginger or radish, to keep warm. Add bitter taste, like leafy greens or dandelion root, and astringent tastes, like cranberry or apple, to maintain the body’s detoxification during this sedentary season.

Unlike most Chinese herbs, astragalus actually tastes surprisingly good as a tea. It has a velvety texture and a sweet, buttery taste. Astragalus is categorized as a superior herb in Chinese medicine. It’s called Huang Qi–yellow energy builder. Used as a maintenance tonic and to assist healing, astragalus boosts energy, increases stress adaptation, and amplifies the efficiency of just about every type of immune function.

Astragalus can be used for acute cold and flu symptoms, and in just about any case it will produce improvement. According to Chinese medicine, astragalus also strengthens the lungs, so it forms the backbone of a program to prevent and treat respiratory infection. Chinese families regularly add astragalus to the family stewpot during the cold season, so that everyone can get a daily immune boost.

Because astragalus is pleasant tasting and mild it’s great for kids as both an acute antiviral and long-term immune boosting.

Native to Sri Lanka and India, Cinnamon Bark is very agreeable. It is a sweet and hot tonic that increases general vitality, warms and energizes the body as a whole, counteracts congestion, stops diarrhea, improves digestion and relieves abdominal spasms. It increases circulation to the joints and kills bacteria and viruses. It has been shown to regulate blood sugar and insulin. Cinnamon relieves minor pains and encourages menstruation while reducing monthly cramps.

This herb is called “the universal medicine” in Ayurveda. Tasty and aromatic ginger is a time-tested remedy for stomach upset. It aids digestion and is one of the best herbs for nausea. It relieves spasms and menstrual cramps, and promotes menstruation. Ginger helps to regulate blood sugar both by stimulating pancreas cells and by lowering lipids (cholesterol, triglycerides) in the blood. Historically, it was one of the most respected herbs for joint health, especially for aging joints. It has relatively high calcium and iron content. Ginger increases peripheral circulation, so it is used clinically for cold hands and feet. Being diaphoretic, it treats some symptoms by promoting sweating.

Mullein is a common wildflower that grows almost anywhere. Herbalists recommend hot mullein tea for coughs, sore throats, and other respiratory irritations. It is the saponins contained in mullein that soothe a sore throat and bring relief. Mullein is most effective when combined with herbs of similar qualities, such as slippery elm bark and elecampane root.

Mullein is also an immune enhancer, active against respiratory disorders. It seems to be antiviral, as recent research indicates the possibility that mullein may be active against herpes and the flu.

Although it is relatively unknown to us here, for centuries Siberians have been using rhodiola, also known as golden root or arctic root, to thrive in their cold climate. Popular as an adaptogen, it relieves fatigue and increases the body’s natural resistance to stress.

In general, rhodiola appears to promote a comprehensive resistance to physical, chemical, and biological stress. According to folk use and modern reports, it strengthens the nervous system, immunity, exercise capacity, energy levels, curbs depression, and may even lengthen lifespan. Rhodiola perks up mental function and memory by enhancing blood supply to the brain.

Thyme is a powerful herbal antiseptic. It’s also an expectorant, loosening the phlegm, and antispasmodic. Thyme tops contain an essential oil composed mainly of the active ingredients thymol and carvacrol. Thymol is one of the most powerful antimicrobial substances known–far more so than some of the strongest antibiotics. The ancient Greeks used thyme for its antiseptic properties and later Europeans employed it for coughs and shortness of breath.

Today, natural healing practitioners use it for upper respiratory infections, especially with dry hacking coughs. As an antibacterial and expectorant, it is widely recommended by German pediatricians for bronchitis. With its large margin of safety, thyme is a respected medicine for children’s cough, especially when the child is anxious from the spasm.