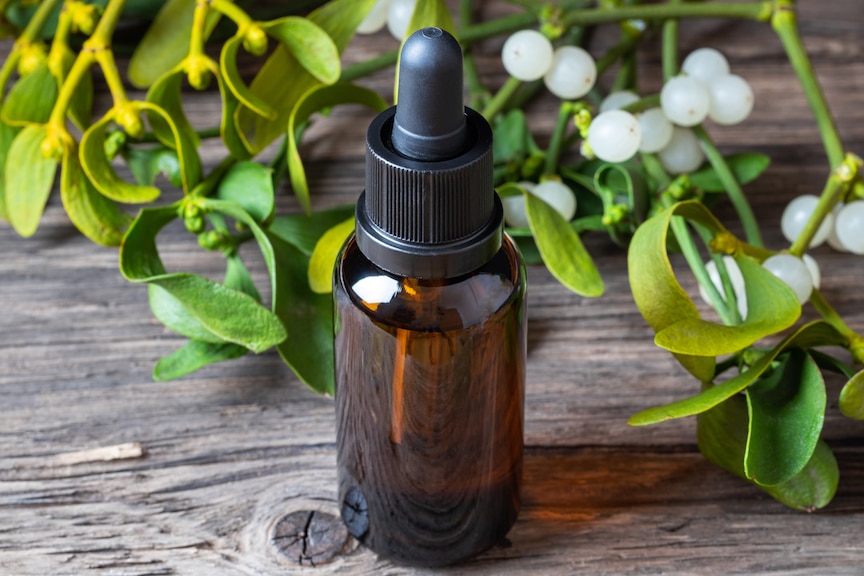 Who hasn’t sneaked a little kiss under the mistletoe? Sure, it’s a tender way to catch a prospective sweetheart in a little romance, but did you know it’s also good medicine?

Mistletoe is famous for kissing during the Christmas season, and legend has it that if two people kiss under that mistletoe, they will fall in love. The plant was also thought to inspire passion and increase fertility. In ancient times, kissing under the mistletoe was a sign of atonement, goodwill, and reconciliation. (Sounds like a modern relationship.) Mistletoe thrives in the winter, so it has long been associated with Christmas. Ironically, Balder, the Norse God of Peace, was slain by an arrow made of mistletoe. The other gods and goddesses then put the plant under the protection of the goddess of love, who ordained that everyone who receives a kiss under the plant will become embodied with love.

Mistletoe is an evergreen parasitic plant that lives on large trees (oaks, elms, firs, pines, apples, elms). The plant has tough, thick, small, green leaves; and waxy, white berries. There are many similar species of plant in the Viscacea and Loranthacea plant families. European mistletoe (Viscum album) is used as a medical remedy. American mistletoe (Phoradendron genus, many species) is a debatable remedy. Some say it is equivalent to Viscum. Some say otherwise. American mistletoe has not made much of an impact in Western herbalism, so we will discuss the European variety only.

All agree that mistletoe berries are poisonous, at least to some extent. But there is some argument about how toxic they truly are. Some sources maintain that berries are only dangerous for babies, and only if handfuls are taken. And there is disagreement about whether it is safe to use mistletoe leaf as a remedy at all. European research finds that mistletoe is safe and effective. European mistletoe leaf is used widely and freely by European herbalists, with very little caution about toxicity, only a warning not to include the berries. As a precaution, pregnant or breastfeeding women should not use the plant.

In recent centuries, mistletoe has been used in Europe for a wide variety of disorders, including nervous disorders, asthma, epilepsy infection and spasm.

Today, though, it is used by herbalists essentially exclusively for hypertension, and it is one of the major blood pressure lowering herbs in the European medicine arsenal. The action is mildly sedative.

Open studies on oral mistletoe have determined that it can reduce the symptoms of high blood pressure, especially headaches and dizziness. German doctors generally agree with this conclusion. Bartram’s Encyclopedia of Herbal Medicine says it can be used as a substitute for beta blocking drugs (with physician permission). Having said all this, one of the leading German herbal medicine physicians, Rudolf Fritz Weiss, says that it has definite benefit in hypertension, and that it is a gentle medicine that needs to be used consistently.

Recent discoveries have found that mistletoe inhibits influenza virus in the test tube. The German government approves it for injection near arthritic joints for pain and inflammation.

Mistletoe served as a folk medicine remedy for cancer for centuries. In the early part of the twentieth century, Rudolf Steiner introduced it as an “Anthroposophical” medicine in modern cancer therapy. Iscador, a fermented mistletoe extract, stimulates the immune system and kills cancer cells, say advocates. Reportedly, this medicine, given by subcutaneous injection, preferably near the tumor, shrinks the size of tumors, extends the survival time of cancer patients and improves the quality of life. Iscador is considered a complementary cancer therapy, but it is, in fact, the most commonly used cancer drug in Germany- 60% of cancer patients use some form of mistletoe preparation. In a study of 396 matched cancer patient pairs in Germany, people who took Iscador survived 40% longer than those who did not. It increased survival time for all types of cancer studied. This is the remedy that Suzanne Somers recently revealed that she was using for breast cancer.

Mistletoe does increase immune function in the laboratory. It increases amounts and activity of various defensive cells. In the lab, mistletoe looks promising for cancer. Many preclinical and test tube studies have shown immunostimulatory and cytotoxic effects. But conventional oncologists have yet to embrace it. There is no evidence that oral mistletoe would benefit people with cancer.

The American Cancer Society stated that mistletoe does not cure cancer. The society cautioned that herbal remedies such as mistletoe should not take the place of conventional treatment in life-threatening diseases like cancer.

Reports have pointed toward mistletoe being toxic to the liver, at least in animal models. However, the PDR for Herbal Medicines finds no health hazards when mistletoe is taken appropriately and in designated therapeutic dosages. It has cardiovascular action, so theoretically mistletoe could cause cardiac arrest in a massive overdose.

People considering mistletoe are advised to check with their practitioner. It is an herb more suitable to be administered by a professional. European therapists minimize any toxicity concerns and find it to be a valuable medicine for stress and high blood pressure. Although it is a gentle medicine, the dose is low, so it is convenient to use.