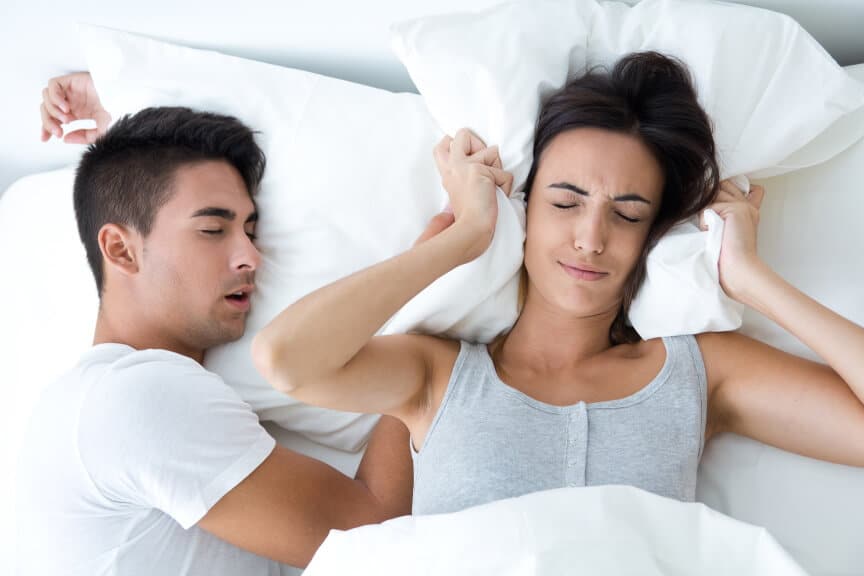 A chain saw? A hibernating bear? A cement truck? Unfortunately, although it might actually be quieter to sleep next a chain saw, it’s your partner.

After the midnight serenade starts, you lie there for a while, trying to decide whether you have the energy to move to the guest bedroom, or whether your bed partner gets banished. Maybe moving to Alaska…

Snoring not only has an impact on how well you sleep but can adversely affect bedtime relationships. The situation is so dire some new homes are being built with two master bedrooms, or even small “snoring rooms” for the offender.

Now you’ve got a sense of what’s going on in about 90 million bedrooms all over the country. According to the National Sleep Foundation, that’s the number of snoring adults. Men give full voice twice as often as women. And it’s common. Up to 50% of men and about 25% of women snore regularly. Nearly three-fourths of people with chronic acid reflux suffer nighttime symptoms such as coughing and snoring. Chronic snorers tend to be overweight and middle-aged and those with allergic rhinitis and asthma are more likely to be snorers.

The snoring sonata begins when the airflow from the mouth or nose to the lungs is disturbed during sleep. This blockage or narrowing in the airway causes the tissues to vibrate and knock against the back of the throat, resulting in the well known nocturnal symphony. Snoring isn’t usually serious, but it does reduce sleep quality and may progress to upper respiratory resistance syndrome or obstructive sleep apnea, a potentially serious sleep disorder. An association between snoring and heart disease has been established, too. If you routinely snore, have it checked out.

You may be able to help snoring with lifestyle modifications, including losing weight, quitting smoking, sleeping on your side instead of your back and eschewing alcohol, snacks, and sedatives before bed. Acupuncture might help.

Shrink the Sinuses with Schisandra Berry

Schisandra berry (Schisandra chinensis), wu-wei-tze, or “five flavor berry”, is a sour, and most definitely astringent, small red berry that is widely used in Traditional Chinese Medicine. Russian and Chinese traditional medicine has long used Schisandra for a wide variety of conditions including coughs, and other respiratory ailments and Chinese medicine considers it specific for asthma.

The drying, tightening property of the berry makes it ideal for what the Chinese call “preserving the essence”- keeping leaking fluids retained where they belong. Used predominantly to arrest mucous discharges, this ability marks Schisandra for postnasal drip sinus swelling. This herb can dramatically shrink swollen sinus tissues. In capsule form — 2-15 grams per day, ideally at bedtime.

Take some Sage Advice with a Sinus Tea

Sage (the kitchen spice, not sagebrush) is another astringent that dries sinuses, and it’s tasty, too. Brew the cut dry leaves into a fragrant tea and take it before bed. 1-3 strongly brewed cups of tea in the evening.

N-acetyl-cysteine (NAC) is the acetylated, more efficiently absorbed, and metabolized form of the amino acid l-cysteine. NAC thins respiratory mucus, allowing it to be swallowed or expectorated more easily. Reducing this mucus helps open the airways and reduces snoring. In capsule form — 3000-5000 mg per day.