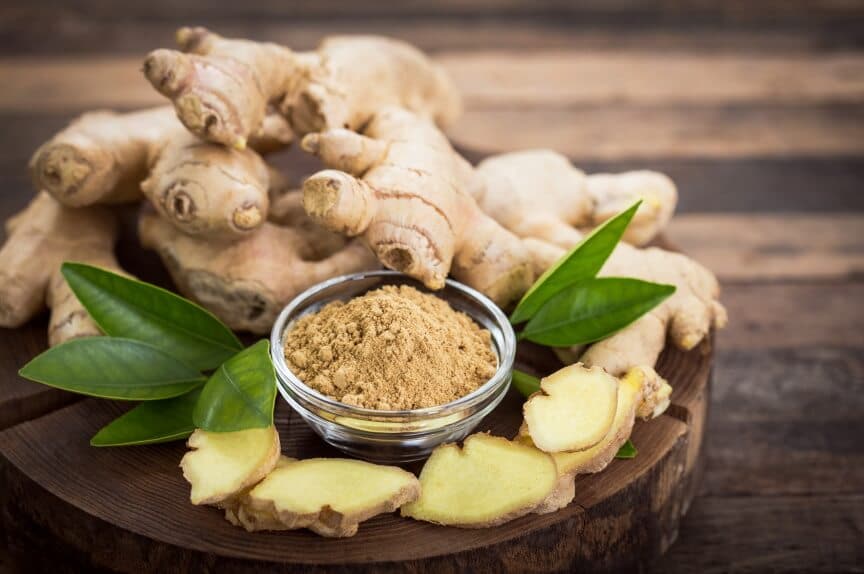 No one quite knows the origin of the zesty ginger root, called the “universal medicine” in Ayurveda, as it has never been found growing in the wild. It is presumed to have originated in tropical India, but it is also an ancient part of Chinese food and medicine. It was common to find a jar of ginger on the counter in 19th-century English pubs so the clientele could add it to their drinks. (Thus ginger ale was born.)

Ginger is a multipurpose spice, used fresh (grated or sliced), as dried powder or “crystallized” with sugar. It has relatively high calcium and iron content.

Ginger is a time-tested remedy for stomach upset, used by nearly every culture in the world. Ginger’s effect on motion sickness and nausea has also been thoroughly proven. Practitioners used ginger in tea for indigestion. It reduces spasm, absorbs, and neutralizes toxins in the gastrointestinal tract and increases the secretion on digestive juices, including bile and saliva.

A study on ginger reported in Obstetrics and Gynecology looked at 70 pregnant women with morning sickness. After using just 1 gram of dry ginger per day, for only four days, 87.5% of the ginger takers reported improvement, compared with 28% who took a placebo.

Among its many uses, ginger treats diabetes, lowering blood sugar, and treats closely related cardiovascular conditions. Ginger lowers blood fats, including triglycerides, reduces oxidation of low-density lipoprotein (LDL, or “bad” cholesterol) and prevents arterial plaque. Research has found that a higher dose of ginger (500 mg/kg, about an ounce for an average adult) produced a significant lowering of blood cholesterol.

Compounds in ginger have shown benefit in the prevention of cancer. Also widely used for arthritis, especially osteoarthritis, in Asian herbalism, ginger is especially appropriate for cold, non-lubricated joints. Ginger increases peripheral circulation, so it is used clinically for cold hands and feet. Being diaphoretic, it treats cold and flu.

In my personal experience, ginger works well for carpal tunnel wrist pain. Slice the fresh roots lengthwise in thin, flat strips. Wrap the wrist with the strips, cover with a bandage, and leave overnight.

Asian medicine uses ginger for migraines. In my observation, ginger is the absolute best thing for treating a migraine at the time it develops. Stir 2 tablespoons of ginger powder into water and drink on the onset of visual disturbance – the “aura” – before the pain starts.

Ginger is very safe, so consume it as desired in food, or use up to 3 grams per day in capsules. Use 1 teaspoon chopped fresh root, brewed as tea, three times a day.