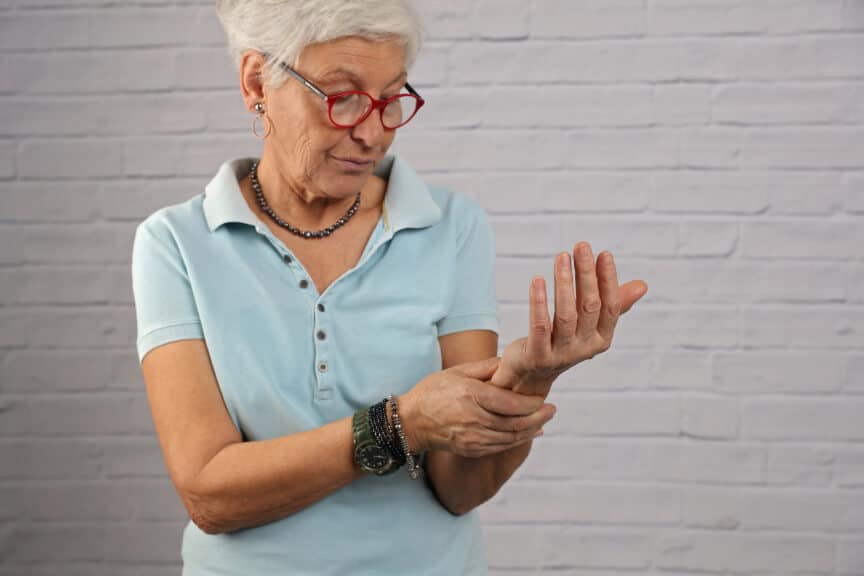 The thought of looking forward to the rest of life with continual pain is pretty scary. But for osteoarthritis (OA) patients, that’s what the future often threatens. Fortunately, this disorder is one of the most preventable with natural medicine.

According to the National Institute of Arthritis and Musculoskeletal and Skin Diseases, the term “arthritis” refers to an assorted collection of more than 100 joint diseases. Arthritis diseases afflict nearly 43 million Americans, and are the most common cause of disability in people 65 and older. Osteoarthritis is the most widespread of these, affecting about 20.7 million, mainly elderly, Americans. Osteoarthritis is characterized by erosion of joint cartilage. Cartilage surfaces fray, and in extreme cases, wear away completely, leaving a bone-on-bone condition that brings pain and limits joint mobility.

The general treatment strategy for OA is to warm the tissues, boost joint mobility and augment moisture and lubrication. A thorough program of bodywork, diet and herbal medicine can be very effective. According to the Arthritis Foundation, almost 45 percent of OA sufferers apply ointments or rubs. It is beneficial for most salves and packs to have a warming effect, promoting circulation in the joints and increasing movement.

You might be familiar with the use of castor oil as a pack. Castor oil is used extensively in Western herbalism, Ayurveda and Chinese medicine. The oil is recommended in Ayurveda, externally and internally, to relieve all cold and dry problems, including pain, constipation and arthritis.

Arnica (Arnica montana) salve is a marvel for joint pain. Swiss research from 2002 looked at arnica herbal gel for mild to moderate osteoarthritis of the knee. Patients applied the salve twice a day for 6 weeks. Pain, stiffness, and dysfunction subscales all improved significantly.

German studies have identified the sesquiterpenoid lactones helenalin and dihydrohelenalin, which were found to cause arnica’s anti-inflammatoryii and analgesic effects. It stimulates white blood cells, which disperse compounds trapped in injured tissue.iv

Thymol is the active terpene constituent in thyme (Thymus vulgaris) oil. Thyme is an ancient herbal medicine, used by the Greeks, Egyptians and Romans. In later Europe, thyme was employed medicinally for sciatic and joint pains, headaches and poor vision.

Historically, thyme oil has been used to help in cases of poor circulation, arthritis, rheumatism, gout, muscular aches and pains, sprains and sport injuries. Thyme is antifungal and antiviral topically. It promotes circulation to the joint.

As a warming remedy, many OA patients find it a beneficial long term treatment for stiffness and pain. Dilute thyme oil with any ointment and apply it as comfortable.

Boswellia contains boswellic acids, which hinder inflammation-producing leukotrienes. Scientific research reveals that it has marked analgesic and anti-inflammatory effects. Ayurvedic practitioners use it for arthritis, but human studies are absent. Boswellia has been shown to reduce inflammatory processes in humans with colitis, however, which bodes well for its ability to treat OA inflammation, as well. Boswellia usually is taken as a purified extract. A dose of 400 mg three times a day is a good start.

Devil’s claw root (Harpagophytum procumbens) has been used widely in Europe as an arthritis treatment. The herb’s iridoid glycosides are most likely responsible for its anti-inflammatory and analgesic actions. A 2002 paper published in Phytomedicine reported on initial results with devil’s claw for back and knee arthritis. Up to 70 percent of the patients got good results from the herb with few side effects.

In 2005, a Phylomedicine study described a one-year followup on devil’s claw as compared to Vioxx, a popular pharmaceutical treatment for OA. The patients took 60 mg per day of the active ingredient harpagoside for up to 54 weeks. Long-term treatment with the herb extract was well tolerated and worked as well as the drug therapy.

The powdered tuber can be taken at 2.5 grams per day in capsules, or 15 ml of tincture daily. The extract dose (standardized to contain 3 percent iridoid glycosides) is 750 mg three times daily. Studies using preparations with 50 to 60mg harpagoside as a daily dose show more effect than alcohol extracts.