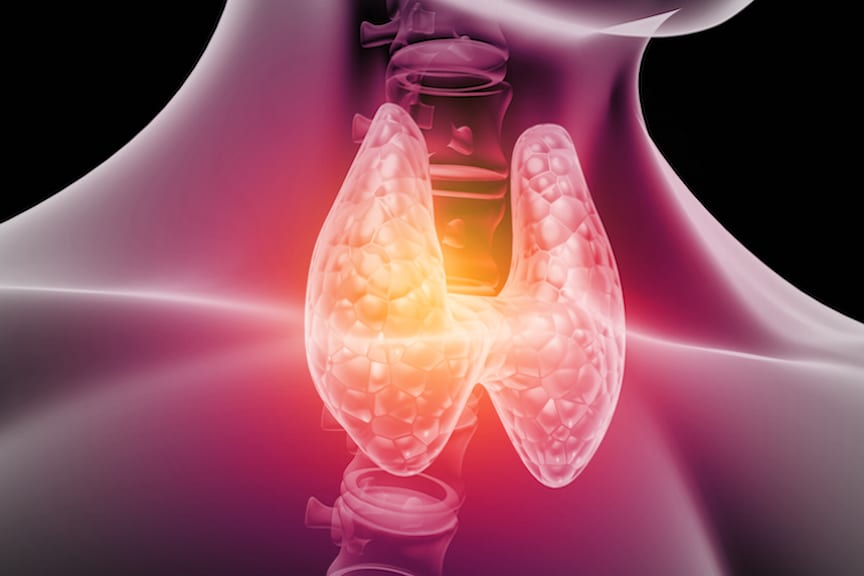 Iodine is the raw material of thyroid hormone, so diets deficient in iodine can promote hypothyroidism. Around the world, about 200 million people have goiters from dietary iodine insufficiency, but the condition is almost unheard of in developed nations, where iodine has been added to salt.

Excess iodine, however, tends to suppress production of thyroid hormones. In people with thyroid antibodies, but no autoimmune symptoms, an increase in iodine can bring on symptoms. Suggestively, countries with the highest iodine intake, including the US and Japan, have the highest prevalence of chronic autoimmune thyroiditis. When people in countries with iodine deficient diets are given iodine supplements, the rate of Hashimoto’s disease increases. Recent animal models and test tube studies have shown the same effect.

The body has a number of mechanisms that act as the front-line against antigens. These include various types of white blood cells, which can attack antigens when they are detected. In some cases, the response is inflammation. When you inhale a cold virus, your body’s response inflames your nasal passages. Clearly, anti-inflammatory herbs should be of benefit in this disorder, and, in fact, they are.

We also develop “acquired” or “adaptive” immunity, when the body is exposed to various antigens repeatedly. Lymphocytes usually develop the ability to differentiate between the body’s own tissues, versus antigens. In autoimmune thyroiditis, the immune system decides that a normal tissue, the thyroid, is an antigen, and puts the immune system into action to destroy it. So, it’s important to do as much as possible to help the immune system work at its best. I think of these suggestions as “immune facilitators.” They certainly work in practice.

Chinese baical scullcap root is another herb high in bioflavanoids, which inhibit histamine and leukotrienes, and are potent antioxidants. This bitter, cold herb has anti-inflammatory qualities comparable to nonsteroidal anti-inflammatory drugs like ibuprofen, while showing no adverse effects. The herb is a powerful antioxidant. The dose is 7-10 grams per day, in capsules.

A sweet, slightly warm herb, astragalus is a staple minor tonic in Chinese medicine. In recent times it has become known as a superior immune enhancer.

Sometimes called “Indian quinine,” this bitter, astringent, hot herb treats flu and fever. It is antibacterial, and is widely used as a general antimicrobial remedy in Asia. Use 4- 15 grams per day in capsules.

Hypothyroid responds very slowly to natural therapies. It is very unlikely to get a rise in blood thyroxin levels before 1-2 months. Expect a year for a complete recovery and a transition to maintenance protocol. Expect a very satisfactory long-term recovery with consistent compliance.

Three herbs head my list of thyroid tonics. These herbs are all slow acting balancers, and any of them might work as well as another. Choose between them according to the subtler indications of the case.

This well-known herb, now used mainly for other purposes, is a general glandular balancer and nourisher. Though not used much now for this purpose, I find it to be quite effective.

A Chinese tonic, he shou wu is well suited to tonifying the thyroid. The herb, also often called fo-ti, is native to China, where it continues to be widely grown. Once it has been boiled in a special black bean liquid, it is considered a superior medicine according to traditional Chinese medicine.

The Chinese common name, he-shou-wu, is from the name of a famous herbalist whose infertility was supposedly cured by the herb. In addition, his long life was credited to the tonic properties of this herb. Traditional Chinese medicine uses fo-ti to treat premature aging, weakness, vaginal discharges, numerous infectious diseases, angina pectoris, premature hair loss and graying and impotence. An animal study from 2000 demonstrated that he-shou-wu is a potent protector of oxidation damage to the heart.

The active constituents of he-shou-wu have yet to be determined. The whole root has been shown to lower cholesterol levels, according to animal and human research, as well as to decrease atherosclerosis. Other research has investigated this herb’s role in strong immune function, red blood cell formation and antibacterial action. The roots have a mild laxative action.

This herb is the original “adaptogen.” It is used in Chinese herbalism as a long-term builder.

Several more herbs deserve mention. Each of these may have its place in a hypothyroid protocol.

Many Western herbalists consider the bark of the prickly ash tree as one of the best tonic, alterative circulatory stimulants of North America. Prickly ash bark has a general benefit for long-term thyroid function.

While known mostly these days for treating hot flashes, black cohosh strengthens the endocrine system, and has anti-inflammatory action.

Willow is a traditional pain reliever that still lives up to its reputation. Willow contains salicin and other related salicylates, which are the herbal forerunners of aspirin. Salicylates, such as those in willow, relieve pain, lower fever and diminish inflammation. According to The American Herbal Pharmacopoeia, “in modern herbal therapy, willow is predominantly used as an anti-inflammatory for symptomatic relief of gouty arthritis and as an analgesic for mild neuralgic pains, toothaches and headaches.”

Aspirin thins the blood, but willow bark does not, so don’t use it for heart disease. On the other hand, it won’t cause the bleeding problems common with aspirin. Patients don’t experience the typical digestive disturbances of aspirin when using willow.

There are no special warnings for using willow. Use a tea brewed from up to 1 oz., dry weight, of the raw herb, per day, an extract containing 240 mg total salicin per day or the equivalent in encapsulated raw powder. Willow can be used for as long as necessary.

This Ayurvedic tonic is a general balancer for the glandular system. Ashwagandha has been shown to increase thyroid hormone in experimental animals.

Often the patient will present already having been prescribed supplemental thyroid hormone (synthetic or natural). This can actually be a good development, as the person is often rapidly feeling better, and it buys time for the herbal treatment, which is slower, to stabilize. Once the condition is balanced, one can gradually reduce the thyroid hormone, with the advice of the physician, while monitoring blood hormone levels and being alert for the recurrence of symptoms.

Other dietary supplements that may benefit hypothyroid include vitamin A and B complex. Since thyroid hormone is made from tyrosine, this amino acid may be helpful.

Include therapeutic foods in the diet. Concentrate on onion, garlic and ginger. Beverage teas such as sage, thyme and strawberry leaf could be added.

There is some recent evidence that cabbage family foods and soy products may retard thyroid function. While the significance of this is not fully understood, it is best to be prudent.

Learn more about holistic approaches to Hashimoto’s Disease in this webinar.