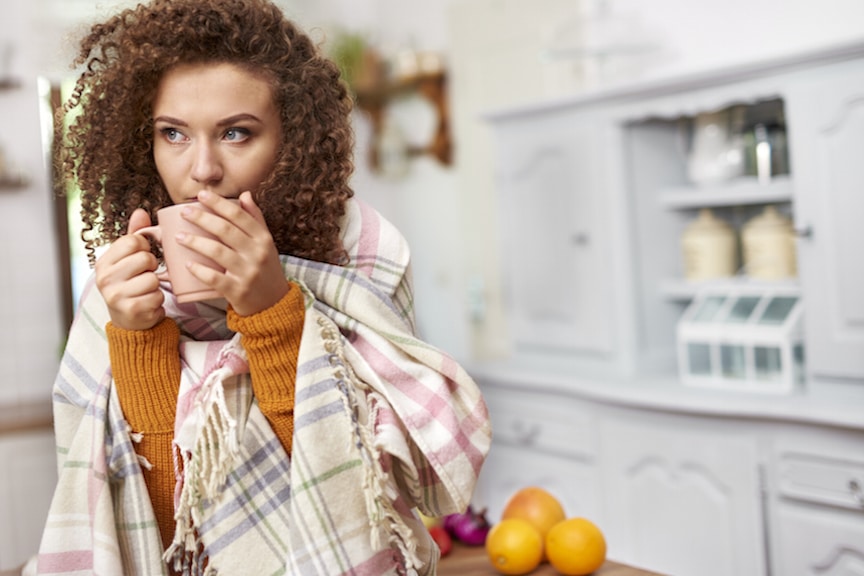 Could you be more miserable? The running nose. The aching muscles. The pounding head. The cold and flu season is here again, and the bug’s given you a good bite. But don’t just lie there. Grab your tissue and head to the herb cabinet. Let the healing power of herbal medicine put you back on your feet.

Cold and flu (influenza) are caused by viruses. These bugs cannot be killed by chemicals- not by drugs like antibiotics, and not by herbal compounds. The only way to tame these diseases is to motivate the body’s own immune system. Fortunately, herbal medicine is good at doing just that.

Herbs don’t just help eject the microbes. You can also feel better while the immune system is doing its job by treating your aches, congestion, cough, and fever.

Herbalists throughout history have used herbs in combination. Each of the herbs in a formula enhances the action of the others. Check out some of these combinations and feel what they can do for you.

These two roots are used together in Traditional Chinese Medicine (TCM). Isatidis root is considered to be synergistic with astragalus.

Astragalus root (Astragalus membranaceus, Huang Qi) is a renowned immune system enhancer. This herb is also a building tonic, sort of a “junior ginseng.” Employed mainly for long-term disease prevention, astragalus can also be used for the acute symptoms of cold and flu. It is used primarily in colds with symptoms of pale face and body aches, but will create improvement in pretty much any case.

An animal study indicated that astragalus has activity against Coxsackie virus, a flu-like virus that mainly affects children. This herb contains immune enhancing polysaccharides similar to those in echinacea and shiitake mushroom.

Isatidis Root (Isatis tinctora, Ban Lan Gen) is a broad spectrum antimicrobial, with activity against many types of virus and bacteria. It is used to reduce fever. Studies show that components from isatidis are immunostimulating in animal tissues.

Where astragalus is warming, isatidis is a cooling herb, so they combine well across a wide range of physiological conditions.

According to TCM, astragalus and isatidis also fortify the lungs.

This classical TCM formula is a combination of honeysuckle flower, forsythia fruit, platycodon root, peppermint, bamboo leaf, licorice root, schizonepeta, burdock root and black soybean. It is a famous first aid remedy that is used for cold symptoms before they settle in (say the first hours to two days). It is typically most effective in the early stages when the symptoms are still at the surface, such as initial aches and pains, stiff neck and clear, watery phlegm. Honeysuckle flower is used in TCM to treat acute fever and sore throat. This cooling herb also strengthens the lungs.

This combination is another reliable TCM classic, and contains a combination of honeysuckle flower, chrysanthemum flower, Vitex negundo, isatidis, evodia fruit, lycium root and menthol. Gan Mao Ling is for symptoms of fever, chills, swollen glands, sore throat, stiffness in the upper back and neck. Chrysanthemum has immune enhancing properties and also kills many pathogenic bacteria, including strep. Honeysuckle and chrysanthemum are often combined for inflammatory conditions in TCM.

This herb (Andrographis paniculata, leaf and root) is a very widely used medicine in both Ayurveda and TCM. It is a wild annual shrub from the plains of Asia that is also cultivated in the gardens of North India. It’s been a household remedy in Asia for many centuries. In Ayurveda, which calls it “kalmegh” (“king of the bitters”), it is used for upper respiratory infection (flu, bronchitis). TCM utilizes Andrographis for fever and headache of colds and flu, tonsillitis, larynopharyngitis, bronchitis and inflammation. Andrographis has been used for more than 12 years in Scandinavia for reducing the symptoms and duration of colds.

This herb has been widely studied by scientists. At least 58 studies have been published since the 1970’s. A study from Chile showed very great benefit for people with colds. A group of 158 people took Andrographis and measured their symptoms of headache, tiredness, earache, sleeplessness, sore throat, nasal secretion, phlegm, frequency and intensity of cough. At day 4, a significant decrease in the intensity of all symptoms was observed for the Andrographis paniculata group.

Andrographis is sometimes now being manufactured in a combination with the immune enhancing echinacea, lemon balm, slippery elm bark, cinnamon bark and Chinese fritillaria bulb. Kalmegh, despite its popularity, has yet to catch on here. Considering the evidence, though, it seems likely that it will soon be in your medicine cabinet.

Elder flower (Sambucus nigra), a renowned diaphoretic and antimicrobial herb, and gentian root (Gentiana lutea), an anti-inflammatory and fever remedy, form the basis of a well known European herb combination for sinus infection. At least eight scientific studies since 1972 have shown the benefits of this combination. Often these herbs are combined with cowslip flower (Primula veris) and sour dock (Rumex acetosa), herbs that liquefy mucus and enhance drainage, and Vervain (Verbena officinalis), another anti-inflammatory.

A randomized, placebo-controlled study of the ENT clinic of the University of Freiburg, Germany, compared the herbal medicine combination with the use of an antibiotic drug along with a decongestant for the treatment of viral sinus infection. The herbs produced faster response, greater effect and lower prevalence of side effects.

You don’t have to suffer from cold and flu symptoms. Kick that bug with herbal medicine.