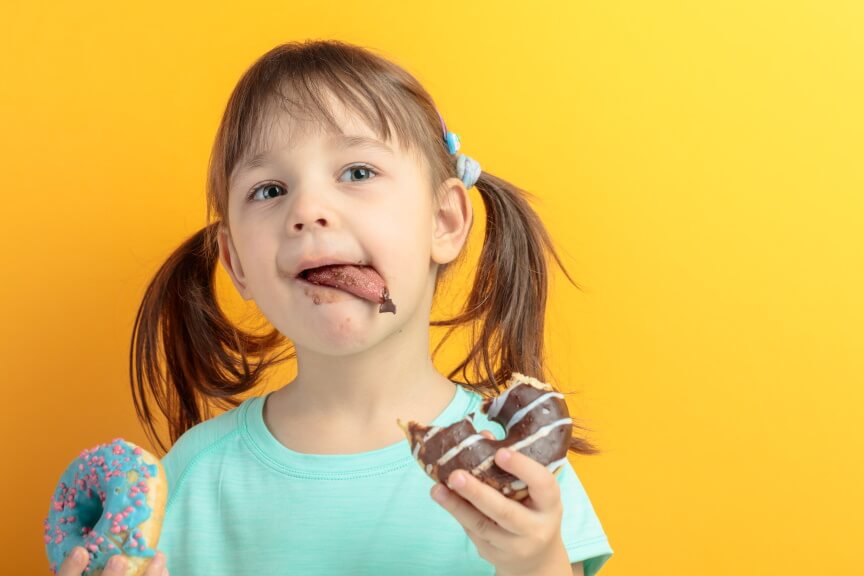 Sugar in children’s diets is of major concern to natural health practitioners. They agree widely that sugar, with its “empty calories”, mood altering effect, and immune suppressing action, can be damaging to children.

In spite of this wide spread agreement and years of supportive study, studies have failed to show the behavior changes in children that teachers and holistic practitioners have so consistently observed.

Among the many reasons to remove sugar from the diet include a study that showed a strong correlation between the development of colitis and the increased consumption of sugar as Asian diets became more “westernized.” Another found a connection between dietary sugar and liver cancer.

The average American eats over 20% more sugar (about 25 more pounds per person per year) than she did in 1986. According to the Center for Science in the Public Interest, the current estimates for the average American’s consumption of caloric sweeteners (sugar, corn syrup, and the like) is around 152 pounds a year. The excess calories make kids fat.

And, according to Dr. Alan Gaby, a prominent holistic physician, eating sugar may also deplete our bodies of calcium. Numerous studies over the years have shown that a high sugar diet causes urinary calcium to increase. A recent French study showed that single chocolate bar, containing 55 grams of sucrose produced a striking increase in blood triglycerides and urine calcium.

To make it worse, when 100 grams of sugar was given to people with a history of calcium oxalate kidney stones, or to their relatives, they excreted even more calcium. In your body, 99% of the stored calcium is in the bones, so the increase in calcium excretion caused by sugar probably means that it is leaching from bone. Therefore, this information suggests that a diet high in sugar may lower the calcium content in bone.

To add to our scientific information, a 1987 study investigated the idea that eating sugar, known to increase blood insulin, would inhibit reabsorption of calcium through the kidney. In other words, the calcium would be excreted in the urine. You guessed it. That’s just what happened- along with zinc and sodium, two other alkaline minerals.

A significant study came out in The American Journal of Clinical Nutrition in 2002 that again gave support to this connection. In the Framingham Osteoporosis Study, scientists with the US Department of Agriculture Human Nutrition Research Center on Aging, at Tufts University in Boston, studied 907 older Americans to determine dietary factors connected with bone mineral density (BMD). They concluded, “High candy consumption was associated with low BMD in both men and women.” In fact, candy consumption was the most substantial predictor of low BMD in the study.

On the contrary, according to Dr. Robin Dipasquale, a leading naturopathic physician, honey has long been considered to be one of the best pH balancers. When used, as is often recommended, with apple cider vinegar, which Dr. Susan Brown says is converted to a weak base, we can see how this combination would help balance body pH.

Other whole sweeteners- maple syrup, molasses, barley malt syrup, rice bran syrup- are considered to be far less acid producing, because they contain less total sugar, and they come with an assortment of alkalinizing minerals built in. But there is a limit. Ultimately, all carbohydrates break down into acids. Be moderate with your need to use sweeteners- they really are just treats, and not necessary on a daily basis.

In a New York school study with 800,000 children, over 5 years, test scores were increased by 42% with dietary adjustments. By feeding the children breakfast and lunch with no sugar, color, additives, flavors, or preservatives, dramatic improvements were noticed in their performance.

Over 20 years ago, Dr. Ben Feingold discovered a connection between certain foods and children’s behavior. His work focused on foods containing salicylates, to which certain people are sensitive. Foods which can cause problems include: almonds, apples, apricots, blackberries, cherries, cucumbers, grapes, oranges, peaches, plums, raspberries, strawberries, tomatoes, and BHT and BHA.

Ferngold, after experience with over 1,200 cases, concluded that 40-50% of hyperactive children are sensitive to artificial food colors, flavors and preservatives, as well as the salicylate containing foods.

While Feingold’s theories have been hotly debated for over two decades, and are generally not accepted by orthodox medicine in the United States, the consensus of natural healing practitioners around the world is that children do better with as little exposure to these artificial additives as possible.