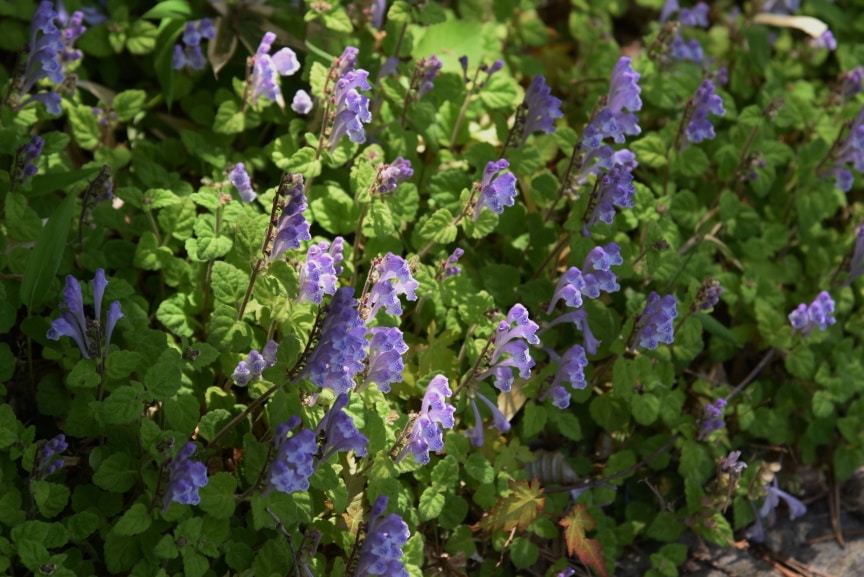 Here’s an old reliable. It’s not a trendy superstar, but it sure is a workhorse of the herb world.

Skullcap (Scutellaria lateriflora) is a classic Western herb, with a long history of use in the herbal systems of North America, and more recently, Europe. In fact, it received its botanical name in the early 1700s. It is one of the most commonly used relaxant herbs in common practice today. The aerial parts (leaf, stem, and flower) are used. This common herb, a member of the mint family, is found in the rich woods and moist soils in eastern North America. And it’s widespread. You’ll find this little gem from Newfoundland to British Columbia and south to Georgia and California. The genus Scutellaria is circumglobal and has over 360 species.

The common names Helmet flower, Hoodwort, and Quaker Bonnet give you an idea of what the flower looks like. You may also see it spelled scullcap.

Though it’s a mint, it has a bitter taste and is not particularly aromatic. It has a cooling, drying energy.

The Cherokee and Iroquois nations used skullcap tea to stimulate delayed menstruation. Skullcap was used by nineteenth-century herbalists to treat a condition that today we might call fibromyalgia (muscle, ligaments, and tendon pain). It was once known as “mad dog skullcap” and was historically used to treat rabies.

This familiar herb is a safe, reliable, mild sedative that excels in relieving anxiety, neuralgia, and insomnia. It treats high blood pressure, premenstrual syndrome, tension headache, and muscle spasm. The Eclectics, the dominant herbal legacy in 1800s America, extensively wrote about and copiously employed, skullcap for these purposes.

Modern herbalists use it to control Braxton-Hicks contractions.

One study found that rats exhibited less anxiety after taking a cool out dose of skullcap.

But enough with the rats. Would it chill out that guy in the next cubicle? The one available study in humans was a double-blind, crossover design. Fifteen women and 4 men, aged 20-70 years, took one of three types of skullcap preparations and rated energy, cognition, and anxiety at intervals for two hours. The researchers found that, in healthy subjects, it “demonstrated noteworthy anxiolytic effects.”

Skullcap also serves as a nerve tonic and tissue rejuvenator- a neurotrophorestorative. In addition, it seems to have a protective effect on the liver.

These qualities suggest skullcap for seizure and movement (chorea) disorders, including a variety if twitches, tics, and tremors, for which it has been used for centuries.

A study, published in Phytotherapy Research, found that rodents prone to seizures that drank water containing skullcap extract were seizure-free, while the control group continued to have seizures.

Few studies have been done on American skullcap, but it looks like its calming action is mainly due to the antispasmodic constituent scutellarin, a flavonoid glycoside. Another constituent, a flavonoid called baicalin and its active metabolite, baicalein, is known to bind to the benzodiazepine site (like Valium) of the GABAA receptor, a sedating neural receptor, and may, based on more recent preliminary information, be more active.

Historically, skullcap’s effectiveness has been enhanced when combined with valerian, chamomile, passionflower, and vervain, so it shows up in many common formulas for sleep and anxiety.

A related species is Baical skullcap (S. baicalensis), the root of which is a widely used remedy in Chinese herbalism. In China, it is found in formulas for fevers, colds, high blood pressure, insomnia, headache, intestinal inflammation and vomiting of blood.

Over recent years, germander (Teucrium) has widely been seen as an adulterant in commercial supplies of skullcap. Germander may be liver toxic, so it is important to verify your sources.

Skullcap is available in dried form as teas, capsules, tablets, and tinctures.

For a tea, start with 10 grams of the dry herb. Infuse the chopped leaves, strain, and drink. Use several small doses through the day for anxiety, or the entire dose at bedtime for insomnia. In tincture form, the equivalent dose is 8 tsp. Fresh herb tinctures are strongly preferred.

There is not enough information on the pharmacological activity and toxicity of the herb to comment on its use during pregnancy and lactation, although no specific contraindications have been stated and it was historically considered safe at these times. Modern midwives sometimes use skullcap for insomnia, sciatica, and stress complaints during pregnancy.

So, all in all, this pretty little plant might not be a heavy hitter, but the next time this old world starts getting you down, skullcap might just take the edge off.