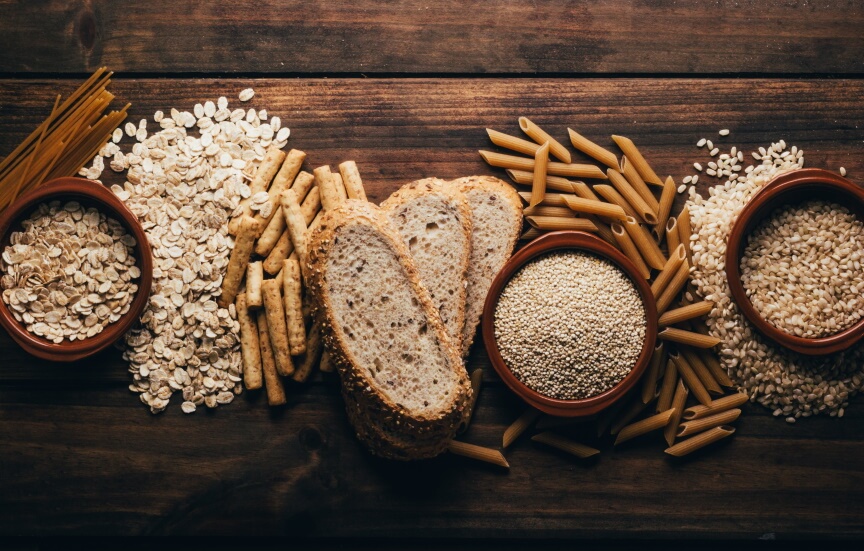 All carbohydrates eventually break down into blood sugar (glucose), the moment-to-moment fuel for our cells. As this glucose is used by the cells for fuel, to provide body heat, acids are produced. That’s just the fact. So all grains eventually contribute to the body’s acid load, regardless of the form in which we consume them.

Of course, so do all other macronutrients, including protein and fat. Since we require these to sustain life, we can’t go without them. It’s just that we don’t want to overdo any one foodstuff, and we want to complement these acid forming macronutrients with other vitamin and mineral rich sources, including vegetables and fruits.

Refined grains, seeds from which the bran and germ have been removed, are the “white” versions- white flour, white rice. These are digested rapidly and speedily metabolized into glucose. This rapid assimilation creates a “spike” of acid that the body may have trouble dealing with. Out come the alkalinizing minerals from the skeleton to buffer the acid byproducts of carbohydrate metabolism.

Unfortunately, just like your checkbook, it might be easier for the body to make a withdrawal from the mineral bank account than it will be to cover it with a deposit a while later. And, just like your bank account, you will get a notice when your account is overdrawn. That notice will be a symptom or a reduction in health and stamina.

During the past century, people began to eat large amounts of refined grains, such as white bread instead of whole wheat bread, and enormous amounts of white sugar. Average whole grain consumption in the United States is only one serving per day, in spite of dietary guidelines that recommend eating several. Almost all grain products devoured in the United States are refined.

Eating whole grains has many advantages. With the bran and germ still intact, all the original fiber remains in the grain. In addition to all the dietary benefits of the fiber, it also slows down digestion of the starch, retarding the acid spike. The whole grain contains almost all of the other nutrients in the grain- the alkalinizing minerals, especially magnesium, the vitamins and the essential fatty acids.

Substituting whole grains for other foods in your diet actually allows you to feel full but eat less total calories. Whole grains, on the average, have fewer calories than the foods they would typically replace, and the fiber content makes you feel more satisfied with fewer calories. This difference can be substantial. A recent study found that people with high carbohydrate diets actually consumed about 300 less calories per day than the average person!

Besides, whole grains in the diet may reduce the risk of diabetes and cardiovascular disease. Research from the Framingham Offspring Study shows that upping the intake of whole grain foods may hold back type 2 diabetes and cardiovascular disease. Previous epidemiological research has indicated that diets rich in whole grains (dark bread, popcorn, oatmeal, brown rice) may ward off these conditions, even though we don’t understand everything about how the whole grains bring their protective effects to bear.

A study of 2,941 subjects in the American Journal of Clinical Nutrition found that people who ate more whole grains had better body fat readings, LDL cholesterol, and fasting insulin. The researchers concluded that the benefits had mainly to do with the magnesium and fiber content of the whole grains.

The recent trend toward applauding carbohydrates, as demonstrated in the current food pyramid, has led to misinterpretation. These benefits are largely from unrefined grains. Many people, however, in trying to emulate this diet, have missed the distinction and loaded up on refined grains, which are much more problematic.

Recently, the high carbohydrate diet has come under fire from a cadre of experts. Again, the statistics in Americans are based on the recent practice of concentrating on white flour products, such as athletes “carbo loading”. A study of 5,000 Italian women, published in The Lancet, indicated that starch, not fat, was linked to an increase in breast cancer. The scientists could not decisively explain their results, but consider that a preponderance of wheat starch could be harmful. Liberal amounts of olive oil had a protective effect.