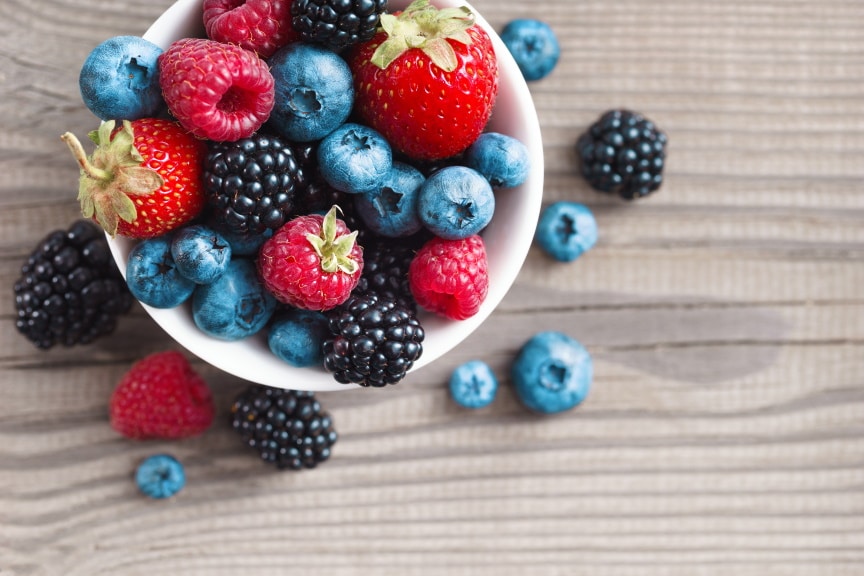 Fifty years of scientific research have shown that the healthiest diets are loaded with fruits and vegetables, and berries especially contribute. For decades, the main reason to eat berries was thought to be vitamin C. But now, potassium, fiber and folate dominate the discussion. And we’re learning that fruits are also rich in antioxidants.

No need to visit to the pharmacy here. Food antioxidants help prevent cellular damage caused by free radicals. The active compounds are a very large collection of polyphenols, including flavonoids and related molecules. These compounds are phytochemicals, nonnutritive plant chemicals that act, not to supply essential nutrients, but to regulate body processes. They are incredibly abundant in nature. There more than 4,000 chemically unique varieties of just one category- flavonoids, for instance. Polyphenols are potent antioxidants, and also have many other health promoting traits, including being anti-inflammatory, antiviral and anticholesterol.

Subcategories include flavonols (such as quercetin from onions and oak), flavanones (such as narigenin from citrus), isoflavones (such as daidzein from soy), catechins (such as EGCG from green tea) and anthocyanidins (such as those in bilberry and grapes).

Much of the antioxidant punch comes from the red, purple and blue anthocyanin pigments that give color to fruits. The darker the fruit, the more potent the protective pigments. These pigments go by a lot of names. You’ll see many terms used to describe them- anthocyanin, anthocyanidin, proanthocyanidins, oligomeric proanthocyanidins (OPCs or PCOs).

Nobel Prize-winning biochemist Albert Szent-Gyorgi, who also discovered vitamin C, uncovered the health advantages of flavonoids in Hungary in the 1930s. Originally, he named the class Vitamin P because they regulated permeability in capillaries. We now know that flavonoids are a subset of polyphenols, which have antioxidant properties in general. Flavonoids occur naturally in plants, but not in mammals. So the only way humans ingest flavonoids is by plants or supplements.

Our government takes these foods pretty seriously. We have all heard of the government’s “5 A Day” program. The National Cancer Institute launched a campaign called Savor the Spectrum , which encourages Americans to eat fruits and vegetables from each color group (orange/yellow, red, green, white and blue-purple) every day. Incidentally, consuming 5 servings of fruit and vegetables daily provides 6-8mg of beta-carotene, an additional potent, fat soluble antioxidant.

Fruits are nutrition powerhouses- far more than ever thought. And berries- stoneless, pulpy fruits containing one or more seeds- though small in stature, make up for it as perhaps the most concentrated sources of beneficial food chemicals. For sheer antioxidant power, berries occupy many of the top tiers among foods.

Fruit antioxidant active ingredients have a boatload of benefits, including immune support, lowering cholesterol, vision improvement, controlling inflammation and reducing skin wrinkles. Fruit pigments pump up the immune system. Scientists at Kaohsiung Medical University in Taiwan investigated the activity and mechanism of action of proanthocyanidin A-1 (isolated from Vaccinium vitis-idaea, a lingonberry bush that produces Alpine cranberry) on herpes simplex virus type 2 (HSV-2), in the test tube. They found that proanthocyanidin A-1 does exhibit anti-HSV-2 activity. The research demonstrated that proanthocyanidin A-1 inhibited viral attachment and penetration, and affected the late stage(s) of HSV-2 infection.

A series of clinical findings at Hollings Cancer Center at the Medical University of South Carolina, in Charleston, South Carolina, substantiate the ability of red raspberries to inhibit the growth of cancer cells. Indications are that daily consumption of 150grams (1 cup) of red raspberries slows the growth of abnormal colon cells in humans and prevents the development of cells infected with human papilloma virus, a cause of cervical cancer. The antioxidant responsible is ellagic acid, a naturally occurring phenolic compound found in certain fruits and nuts. Research in the past decade confirms that ellagic acid has proven to be an effective antimutagen and anticarcinogen as well as a cancer inhibitor.

It also has anti-bacterial and anti-viral properties. Ellagic acid acts as a scavenger to “bind” cancer-causing chemicals, making them inactive, as well as preventing binding of carcinogens to DNA. Ellagic acid itself is not in plants themselves. It forms from raspberry ellagitannins after consumption. Red raspberries are the highest source of ellagic acid yet discovered, with over twice as much as strawberries, and over ten times as much as cranberries, two other relatively rich sources.

According to James A. Joseph, a lead scientist at the USDA Human Nutrition Center on Aging, the very pigments are often what make produce so beneficial. He has written a guide to eating by the color wheel, The Color Code: A Revolutionary Eating Plan for Optimum Health. This encyclopedia of richly hued foods offers the low-down on everything from apples to yams. Joseph wants you to eat 9-10 servings of vegetables a day, in rainbow colors and buy organic.

Blueberry is the brain berry, says Joseph. In one series of experiments, Joseph put rats into oxygen chambers to mimic the oxidative damage that goes along with brain aging. Normal rats seemed to age overnight, but rats which had feasted on blueberries had no damage at all. In his best-known group of trials, elderly blueberry-fed rats showed actual improvements on cognitive and motor-skills tests.

Epidemiological evidence implies that blueberries may be protective against, or reverse, neurodegenerative disorders, including neuronal aging and Alzheimer’s disease. A study conducted at the University of Guelph says that blueberries help protect the brain and central nervous system by causing an increase in serum antioxidant status, which is associated with reduced risk of chronic and degenerative diseases. A Tufts University study showed blueberries enhanced brain cell signaling associated with memory and concluded it may be possible to defeat genetic predisposition to Alzheimer’s disease through diet.

Grapes led the way as attention turned to fruit antioxidants. In a study of red grape seed proanthocyanidins, 100 mg/kg reduced free radical activity by 75 percent in rats. These are often used to treat arthritis and other inflammatory conditions. A research review of grape seed found that oral use decreased plasma total and LDL cholesterol in subjects with high cholesterol.

Grape seed extract is showing up in the unlikeliest of places, including in cereal, nutrition bars and yogurt. Once consigned to super-antioxidant supplement formulas, it is popping up in 100-percent juice beverages in a move to raise a juice’s antioxidant capacity to be at the same level as wine. It’s also being used in smart waters to boost their health benefits without a boost in calories.

Resveratrol, a grape antioxidant, accounts for 5 percent to 10 percent of grape skin biomass. It has cardioprotective effects. It has been found to inhibit each stage of multi-stage carcinogenesis, specifically prostate cancer. Bilberry (Vaccinium myrtillus), a European relative of cranberry and blueberry, has become a popular supplement in the US, and has become especially associated with vision benefits. The anthocyanidins found in bilberry include cyanidin, delphinidin, petunidin, malvidin and pelargonin. Bilberry may assist in reducing age-related macular degeneration risk.

Once upon a time, black raspberries were sold mostly to make purple dye- the kind used to stamp meat USDA APPROVED. Besides being a largely undiscovered delicious fruit, they now are known to have some stunning antioxidant properties. Biologist Gary Stoner, of Ohio State University, published work showing that these tasty berries inhibited cancer of the colon, mouth and esophagus. One study showed a 60 to 80 percent reduction in colon tumors in rats fed high levels of black raspberries. The fruit, at only 5% of an animal diet, reduced the oral cancers by about half. Human trials have yet to be conducted with black raspberries.

An apple a day keeps the doctor (or at least senility) away, after all. One fresh apple has the antioxidant zap of 1,500 milligrams of vitamin C, a dose more than 15 times higher than the RDA. The Journal of Agriculture and Food Chemistry says that “The high content of phenolic compounds, antioxidant activity, and antiproliferative activity of apple peels indicate that they may impart health benefits when consumed and should be regarded as a valuable source of antioxidants.”

Scientists at UC Davis School of Medicine say that drinking apple juice and eating apples has a valuable effect on heart disease risk factors. Compounds in the fruit and juice act like red wine and tea do to slow the oxidation of LDL cholesterol. When LDL oxidizes, plaque accumulates causing atherosclerosis.

You will soon be hearing a lot more about the ORAC (Oxygen Radical Absorbance Capacity) testing system. It measures the antioxidant capability of substances. ORAC values are soon to appear on food packages, giving the consumer a tool to compare antioxidant benefits from one product to another.

If fruits and vegetables with a high antioxidant capacity are consumed as part of the 5 recommended servings, ORAC unit intakes as high as 6,000 – 7,000 can be achieved. How much fruit do we need to eat? Seems like the more the better, to a point. The U.S. Department of Agriculture (USDA) estimates U.S. flavonoid consumption is between 23 mg and 1,000 mg per day- a pretty wide spread. The USDA Food Guide Pyramid recommends five to nine servings of produce daily. If one of those servings is a dark fruit or berry, you’re probably in good shape.