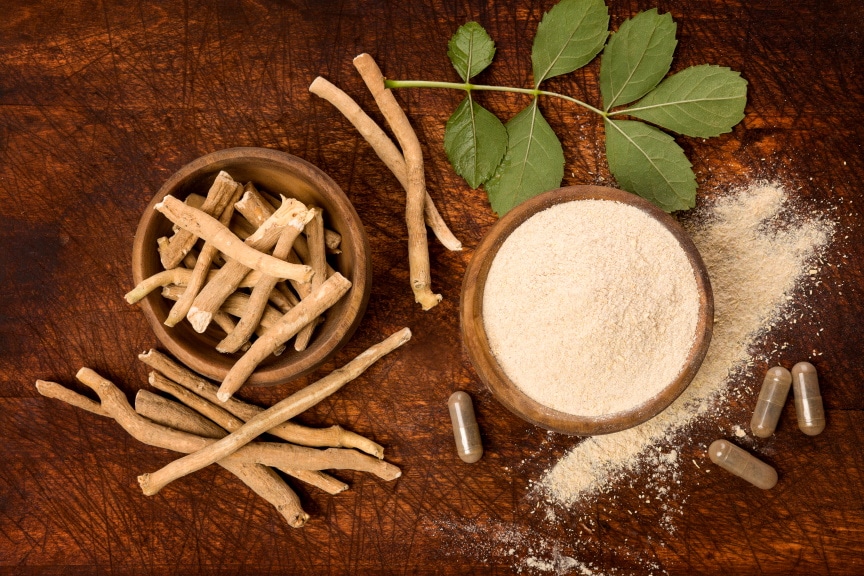 Ashwagandha root (Withania somnifera) looks like an overnight sensation but is really an ancient herb, used in Ayurveda. Sometimes named “winter cherry”, ashwagandha, a relative of tomatoes and potatoes, is the main tonic, especially for men, in the Ayurvedic herbalism, similar to ginseng in Chinese medicine. Ayurveda considers this long-term stamina building herb to be a Rasayana or particularly powerful rejuvenative and sexual tonic. The name ashwagandha means “like a horse”- you get the idea.

And the sexual benefit is not just from folk herbalism. An animal study confirmed that extracts of ashwagandha increased sex hormones and sperm production, presumably by promoting a testosterone-like effect. In a double-blind clinical trial, ashwagandha (3 grams per day for 1 year) was applied for aging symptoms in 101 healthy male adults in their 50’s. The herb produced significant improvements in hemoglobin, red blood cells, hair color, and body height. It lowered blood cholesterol, calcium loss- and 71.4% of those who received the herb reported improvement in sexual performance! Pretty impressive.

Ashwagandha is one of the most promising herbs for building overall health. Ayurvedic herbalism uses ashwagandha for general weakness and exhaustion, weight loss, memory loss, nerve diseases, cough, anemia, and insomnia. Modern doctors are most likely to employ it for chronic fatigue, anxiety, and insomnia. For chronic heart and vascular disorders, especially congestive heart failure, it is often combined with the famous arjuna bark (Terminalia arjuna).

Repeated studies continue to confirm the stress tolerance, performance, and endurance enhancing benefits of this herb. Ashwagandha was shown to increase swimming time in an endurance test, as well as increasing the size of the heart and the content of blood sugar fuel in the heart and liver. In fact, science shows ashwagandha to be better than ginseng as an antistress medicine. A rat study indicated that the herb reduced brain damage caused by stress by 80%.

Ayurveda maintains it nourishes and regulates metabolic processes and stabilizes mood. In an Indian study, the researchers concluded, “The investigations support the use of Withania somnifera as a mood stabilizer in clinical conditions of anxiety and depression.”

As well as being a slow-acting tonic herb, ashwagandha is, in my experience as an herbalist, a superb herb for treating chronic anxiety. It takes about a week to work up to the proper dose, and about another week for the herb to reach maximum effectiveness. Since ashwagandha is a slow-acting herb, you may take your daily dose at any time during the day. Used this way, ashwagandha prevents the onset of the anxiety episode.

Ayurvedic herbalists use the herb to reestablish long-term sleep rhythms. Rather than making you sleepy when you take the herb, this remedy seems to regulate sleep cycles over time, facilitating more refreshing sleep.

Ashwagandha has antioxidant activity in the brain, which may explain, at least in part, a host of its effects, including the reported antistress, immunomodulatory, cognition-facilitating, anti-inflammatory and anti-aging benefits.

Other studies show ashwagandha to have immune-enhancing action. Scientific discoveries also show that ashwagandha has substantial anti-tumor effects, as well as enhancing the effect of radiation therapy in cancer while protecting healthy cells.

A human study determined that ashwagandha produced a decrease in blood sugar, comparable to that of an oral hypoglycemic drug, and a significant decrease in serum cholesterol, triglycerides and LDL, and VLDL cholesterol.[xiv]

Take about a gram per day, over long periods, up to many years, as a rejuvenator, but, since ashwagandha is very safe, larger quantities are often used in Ayurveda short term. In India, it is given with pungent, heating herbs (ginger, pepper, etc.) to increase its tonic effects.